Born in Musyaff, Syria in 1985
Lives and works in Marseille, France

Khaled Dawwa obtained a degree from the Faculty of Fine Arts in Damascus, majoring in sculpture, in 2007. He works with clay, and his sculptures reflect the Syrian people: fragile, brittle, malleable, but still alive. The beauty of his sculptures stems from the attitudes of these characters, whose position harbours their state of mind. 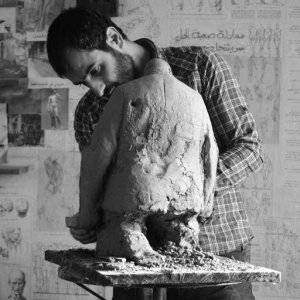 Since 2007, the work of Khaled Dawwa has been reflecting a universe filled with expectation. This expectation, existing both as an act and as a lack thereof, is a call, a hope, and a look outside, but also a silence, a void, and a mute withdrawal. The world he taps into, and its protagonists, constantly examine this issue, and are in turn recaptured by this paradox. The fluctuation between their boundaries leaves its mark on Khaled Dawwa’s fragile figures, injecting them with a particular energy; they advance without movement, illuminated with shadow. The start of the Syrian conflict is the source of a rupture, indeed radical change, in Khaled Dawwa’s universe of expectation.

His language and work undergo a palpable metamorphosis in time with the course of events. The tools and materials used evolve; lighter, more “clandestine”. They in turn seek to express, to say something more. The figures and their world also transform, but always with this background canvas of expectation. Pieces like Dissidence, Froid (“Dissidence, Cold”) and Où as-tu perdu ton corps? (“Where did you lose your body?”) evoke this continuity.

In mid-2013, the area where his studio is located was bombed, and Khaled was injured. Arrested then imprisoned, he is sent to serve in the Army. Refusing to engage in any military activity, he deserts and is forced to flee Syria. He heads to Lebanon, where he lives in hiding for a year, before leaving for France, where he arrived in October 2014. This long, 18-month journey, which saw him experience hospital, prison, enlistment and exile, intimately linked with the events taking place in Syria, is today reflected in his work, and has impacted on him deeply.

I’m going to explode, everything inside of me is about to explode.
Close your eyes and imagine you’re completely enclosed within an area of half a square meter.
Surrounded by a load of human beings, in this half-meter by two surface area.
Imagine you are witnessing all the daily details, meals, drinks, cold, pain, nostalgia, games, illness, singing, sleeping, delirium, painting, hunger, insults, death, just in this area,
Compressed …. And I can’t escape
In this square, I no longer have any contours of my own
The bodies of the others are mine.
A hand moves, perhaps it’s mine, perhaps it’s his or hers, perhaps it’s ours
“Don’t move” … you’re not allowed to move.
Compressed
And I want to sleep … “Learn to sleep standing up”
I want to shout or maybe even cry … “You can, as long as you don’t scream”
Compressed …
The man near me is dead… we’re all dying.
Imagine yourself there…
What day is it?
I want to know the time… I want to be deaf.
I don’t remember their faces… I want my mother… one day I saw her in a dream.
I want to get out… I will marry every woman when I get out.
Compressed
You’re here, now
Someone else is over there
Thousands of others are over there, probably for eternity… over here.