Born in Damascus, Syria in 1982
Lives and works in Montreal, Canada

Cham Chahda was born in Damascus, Syria in 1982. She received her BFA from Concordia University in Montreal, Canada, in 2016. Cham works predominantly in the medium of ceramics, but includes mixed media and different materials in her sculptures. She participated in many group exhibitions in Montreal, including juried shows at Galerie D’este, Art Mur Gallery, VAV Gallery and the Musée des Maîtres et Artisans du Quebec in Montreal. Her work was featured in the “Ceramics: Art & Participation Magazine” and “The Crafted Dish” that was launched for the National Clay Week in Canada. Cham Chahda currently lives and works in Montreal, Canada. 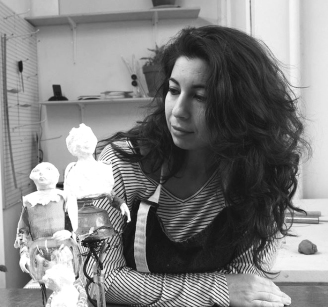 Cham Chahda’s primary concern is the human being, his fragility, both his ability to create beauty and his propensity to destruction. At first sight, Cham’s sculpture is figurative, but by delving into the details we realize the depth of her thought: What makes us a human being in the 21st century? How does material life affect the deepest part of our existence? Our attachment to the things around us, our desire of possession, what remains of us and of those who crossed our path, the haunting memories of a country devastated by human ignorance; what remains, those who remain and all that has gone for ever, except in the soul where there are indelible traces of presence and absence, and steps taken on the path of life.

I am obsessed with the subject of being “human”.

My work is figurative sculpture, and takes its inspiration from the study of both physiology and body language. My figures always come with a narrative, where body gestures, facial expressions and interpretations of human form evoke an emotional response from the viewer.

For the past five years my artwork was affected by the devastating situation in my homeland of Syria. During this period the figures I have been making expressed personal reflections on death, torture, starvation and displacement. The destruction of the Syrian country and the suffering of its people have become my drive for producing and making, in an attempt to release my spirit from the haunting images coming from my homeland.

The last three years I developed an interest in working with mixed media. I produced a series of figures using found objects, porcelain, metal, glass, leather, hand-made paper, and steel wire. The quality of some of the materials that form parts of the figures, for example the delicateness of Japanese paper and the transparency of glass, serve as a reference to the fragility of our bodies and the very nature of human existence.