Born in Musyaff, Syria in 1985, Khaled Dawwa obtained a degree from the Faculty of Fine Arts in Damascus, majoring in sculpture, in 2007. He works with clay, and his sculptures reflect the Syrian people: fragile, brittle, malleable, but still alive. The beauty of his sculptures stems from the attitudes of these characters, whose position harbours their state of mind. He lives and works in France since 2014.

Since 2007, the work of Khaled Dawwa has been reflecting a universe filled with expectation. This expectation, existing both as an act and as a lack thereof, is a call, a hope, and a look outside, but also a silence, a void, and a mute withdrawal. The world he taps into, and its protagonists, constantly examine this issue, and are in turn recaptured by this paradox. The fluctuation between their boundaries leaves its mark on Khaled Dawwa’s fragile figures, injecting them with a particular energy; they advance without movement, illuminated with shadow. The start of the Syrian conflict is the source of a rupture, indeed radical change, in Khaled Dawwa’s universe of expectation.

His language and work undergo a palpable metamorphosis in time with the course of events. The tools and materials used evolve; lighter, more “clandestine”. They in turn seek to express, to say something more. The figures and their world also transform, but always with this background canvas of expectation. Pieces like Dissidence, Froid (“Dissidence, Cold”) and Où as-tu perdu ton corps? (“Where did you lose your body?”) evoke this continuity.

In mid-2013, the area where his studio is located was bombed, and Khaled was injured. Arrested then imprisoned, he is sent to serve in the Army. Refusing to engage in any military activity, he deserts and is forced to flee Syria. He heads to Lebanon, where he lives in hiding for a year, before leaving for France, where he arrived in October 2014. This long, 18-month journey, which saw him experience hospital, prison, enlistment and exile, intimately linked with the events taking place in Syria, is today reflected in his work, and has impacted on him deeply. 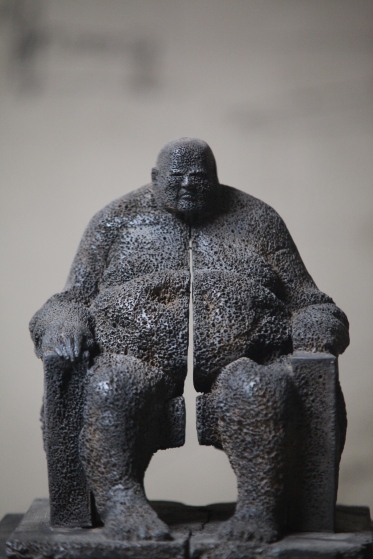 Khaled began working on his series “Compressed” upon his arrival in France. He presented his first solo exhibition in the city of Marseille in southern France in June 2015, and then in Paris in October of the same year.

The “Compressed” collection mimics the artist’s impressions and feelings through people in a state of physical and psychological compression. It ranges from his arrest in Syria in May 2013 through his stay in Beirut to his exile in France.

This collection includes more than 40 works of art and Sculpture with grilled clay, as well as a wide range of ink-on-paper works.